After almost a year of waiting the NBA finals are finally here.  Over the first two games the Golden State Warriors have swept the Cavs outscoring them a combined 245 points to 204.  While the action on the court has been less than competitive, this series has still been an eventful one.

2-0 is an insurmountable deficit for the Cavs to overcome.

RENALDO: The only way you believe this is if you lack all awareness of the most IMMEDIATE NBA Finals history and are a complete prisoner of the moment (So most of you). Even if the Cavs do end up getting swept, the rush to judgment has been astounding this year with people quick to tell anyone within shouting distance that this series is over. These are not the worst game one and two defeats of the NBA Finals. You saw worse last year. The Warriors took a 2-0 lead last night with an average margin of 20.5 points per win after taking game one 91-113 and game two 113-132. In 2016, the took game one 104-89 and game two 110-77, an average margin of 24 points per win. They still lost that series. There’s a reason the NBA mandates that you win four games, it’s not over until you do.

TAIGE: Yea, cause a 2-0 lead worked out just fine for The Warriors last year.

RANDY: The first half of game three will be some of the most important minutes played in this year’s finals. This is not the same Warriors team they played last year, so the fact that they came back from a 2-0 deficit last year has nothing to do with this series. Lebron will be great, but if he can only get two shots out of JR Smith at home, it may be time to start planning for next season.

LeBron can’t keep this up, and even if he does…

RICARDO: It still isn’t enough to beat this Warriors team in two or three consecutive teams. LeBron in his match-ups against GSW is as close to a maxed out created 2K player that we have seen in real life, but at some point , even his heroics aren’t sufficient.

TAIGE: No he totally can. That guy came from the same laboratory they made Jordan, Wilt, and Hakeem in.  If the Warriors pull this off it’s despite Lebron, it won’t be because Lebron didn’t show up.

RENALDO: Nothing we’ve seen since 2002 suggests that LeBron is an actual human, of course he can keep this up. Off games just meant he needed maintenance (we’re all looking at you Savannah). LeBron doesn’t rest, he simply takes a few hours in the Hyperbolic Time Chamber and when he emerges he’s able to decide an entire series with a chase down block to decide a series. This is not the area where Cleveland should be concerned.

RANDY: Lebron doesn’t get tired. He’s having the best season of his career in his 14th year. The only problem is, the majority of this Cavs team has been in the league about 10-14 years as well, and they’re not Lebron by any stretch. Lebron will keep it up. The problem will be finding help on both ends of the floor outside of Kyrie and Love.

RICARDO: Klay so happy to be playing the third option. This man is now living to catch the opposition in a screen and roll, straight up praying the defence takes their time getting through that pick and shooting wide open threes at his will. He has the greenest light possible, in the bay, and he wins.

RENALDO: I won’t say we’re directly responsible…all I’m saying is one day we swore allegiance to the flag and the next thing we know, Klay Thompson had himself a game – 22 points on 8-12 shooting, 4-7 from three (one was just a straight up heat check from near half court) and seven rebounds. Doesn’t matter how much he struggles, Klay still gets all of the shots he wants on offence…and he has a 10YS shirt, so there’s that.

The Cavs Will Play Better at Home…

TAIGE: Probably, but even if they do it still doesn’t mean they can beat the Warriors.

RICARDO: But their better is 105 to 110, they don’t have sufficient defense to slow the Warriors to 115. It’s weird thinking that this the first time in a long time Cleveland doesn’t have enough on both ends. They’d better pray.

RENALDO: The old cliche they teach you just before they prop you up in a suit in front of a microphone is that role players play better at home, thus buoying a team. Well everyone plays better at home, we just notice the role players because we’re accustomed to them being low profile more often than not. Take JR Smith for instance, in game two last night he gave the Cavs absolutely nothing in 13 minutes – 0 points, 2 rebounds, 4 fouls – it’s almost impossible for him to be worse than that in game three. Take the stars for instance, Kyrie was pretty awful in game two (19 points on 8-23 shooting) and we expect that to improve dramatically in game three, but that won’t be credited to being at home.

RANDY: Better won’t be enough. They need to be at their absolute best to get by a Warriors team that smells blood in the water.

The Better Celebrity Row Determines the Winner of the Series 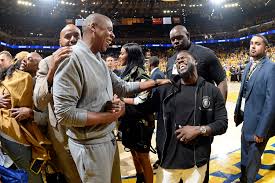 RENALDO: Oakland has had an eclectic cast of characters so far for their sideline ranging from posers to Oakland natives. Game one had Jay-Z, Rihanna, MC Hammer, Kevin Hart and I’m sure e-40 was running around somewhere. Game two we saw 2 Chainz, Von Miller, Odell Beckham and some soccer dude and a car driver that Taige told me was really popular.

TAIGE: Nal was talking about this picture of  Soccer star Neymar,  F1 driver Lewis Hamilton and New York Giants wide receiver Odell Beckham at the game that Odell’s dad posted from the game in Oakland.

Also how haven’t E40 or Too Short been featured on the sideline cams? That’s a travesty, those dudes are Bay Area fixtures. I guess they really are gentrifying Oakland.

I can’t wait to see Machine Gun Kelly and Drew Carey in Cleveland.

RICARDO: Ain’t no nightlife in Cleveland. What would any of these people do after the game in the Land? They’re not showing up.

RANDY: Drew Carey, Dave Chappelle and the other five famous people from Ohio, Lebron needs you now more than ever.

RENALDO: That they watch everything through a prism of hatred. Sports is supposed to be entertainment, yet we take this so seriously we hate on employees for their freedom of choice (completely ignoring the fact that 97% of us are employees), find the most asinine reasons to hate and allow absolutely no room for nuance in the discussion. LeBron James can be great…but also lose. Both of those things can be true. Kevin Durant is still great if he chooses to play with other great players. Both of those things can be true. I don’t get the nobility in wanting these players to beat their heads against a wall and lose for a decade or so just so they can finally achieve that arbitrary measurement of career success we think they desire above all else – our respect. You can choose a team, you’re supposed to, that’s what makes this fun and exciting, but the unnecessary hate, the clinging to nostalgia, the nonsensical circular arguments (“He’s not a winner! – player moves to team giving him the best opportunity to win – “He’s a coward, I’ll never respect him!) it’s all a bit much.

RICARDO: Them getting so excited that LeBron loses, that they don’t realise that what he doing may never be replicated. In game 2 the man had nine assists by halftime (NBA record) and finished with a 39-point triple-double (child please).

TAIGE: I don’t know where to start. There’s the never-ending chorus of Bahamians who swear that Klay Thompson wants “his own team” despite the fact that they’ve never talked to the man in their lives and doesn’t know what he wants (I have talked to him, he wants to win Championships, live in the Bay Area and take his dog for a walk, and be a low-key wealthy person).

I’ve heard 3 time NBA finals MVP Lebron James being called a choke artist, I’ve heard Kevin Durant called all kinds of unholy things for the insidious act of taking a better job in a better city that isn’t LA, I’ve heard someone say the Cavs bench was better because Deron Williams and Kyle Korver averaged more points per game than anyone off the Warriors bench (despite the fact that both started for half the year and as a result had their numbers inflated, and the fact that this calculation didn’t account for anything other than points), I’ve heard the ubiquitous “Lebron couldn’t make it in the 80s” hot takes despite the fact that he’s 30 pounds heavier than the toughest 80s tough guy and faster than any coked-out jitterbug point guard the leagueever produced during that period.

The thing that annoys me the most is the straight up hate.

I can’t lie I’m rooting for The Warriors, I want Kevin Durant to finally win the title that eluded him all these years, I love Klay Thompson and I love the Bay Area.  But I would never take anything away from Lebron and his great accomplishments.

Bahamians in general don’t know how to root for one thing without tearing another down and it’s annoying.

I thought the election was over, damn.

RANDY: The amount of Miami Heat and LA Laker jerseys worn during a GSW vs Cavs Finals, girls in club dresses and heels at sports bars, the fitted caps in 2017, the inaccurate stats, the hate for Lebron and the fact that everyone is now a “Kewin” Durant fan are all the things I hate about watching this year’s finals with Bahamians.