The day after Bahamians gathered together to march for transparency in government, they turned around and memorialized a bloodthirsty dictator who would have jailed and tortured anyone in his country who even spoke about protesting him, even if they did so in the privacy of their own homes.

Some shit is too stupid to make up.

This past weekend Fidel Castro, the former communist dictator of Cuba passed away at age 90.  There are many different ways to feel about Castro, and you wouldn’t be wrong for feeling any of them because he was many things to many people, he was a freedom fighter and an anti-imperialist anti-capitalist who nationalized his country’s considerable natural resources dislodging it from American control. He revolutionized education and the medical field and supported anti-colonial and civil rights movements around the world including the civil rights struggle in the U.S. and the Anti-apartheid movement in South Africa.

For one: people never voted for Castro to rule Cuba, he seized power via a violent insurgency aimed at uprooting US supported strongman, Fulgencio Batista.  Once he acquired power, he became a Soviet supported strongman, complete with the perquisite military uniform and everything.

He made himself dictator for life and exterminated any threats to his power with extreme prejudice.  Castro was not here for any kind of dissent. He presided over a sprawling internal security apparatus that had people spying on their neighbors and routinely committed a multitude of human rights abuses on its populace including torture, summary kidnappings and executions, mock trials and North Korean style gulags where political prisoners would be sent to do slave labor until they were either worked or starved to death.

Some think that Fidel Castro was some sort of friend of the people because of his staunch anti-capitalist rhetoric.  While he was a pain in the ass to western capitalist governments because of his resistance efforts he brutalized his own people with his authoritarian totalitarian tendencies.  He goddamn sure wasn’t a friend to The Bahamas, he was the only head of state of any country to ever invade The Bahamas or kill Bahamians.

For all the ways Castro advanced Cuba and helped the proletariat he presided over a dictatorship that murdered, tortured and brutalized citizens with impunity for even voicing objection. Some people may think that the atrocities Castro committed on his own citizens are a western fabrication or an exaggeration by the Miami exile community but the truth of the matter is people who live in a free society with a government on the up-and-up don’t drop everything their families have built over decades, or even centuries, to risk their lives to travel to a country where they have absolutely nothing. Furthermore there’s nobody who ever seized power by force, remained dictator for decades and wasn’t a complete fucking loon who murdered and tortured a whole lot of folks trying to satisfy of their power-boner.

Castro wasn’t the exception to the dictator rule, he was a garden variety dictator with exceptional rhetoric who did some things well, like education, healthcare, torture and murder,  while being awful at other things, like free speech, and making sure people didn’t starve to death in a famine (in the 1990s for christsakes).  He was a more charismatic version of President Snow from The Hunger Games.  He was good at the rhetoric, educating excellent doctors, training elite athletes and teaching kids how to read,but deep in his heart he was a sadistic power-hungry murderer.

For every fiery revolutionary ideal being advanced in any country brings humanitarian consequences with it.  Castro was many things, and if you were to acknowledge Castro the defiant revolutionary reformer with the cool quote and cool picture on your cool tee shirt without acknowledging the ax-crazy psychopath who sent thousands of his countrymen to the gulags and the dungeons because he thought they might hinder his quest for ultimate power, then you’re looking at these things the wrong way. 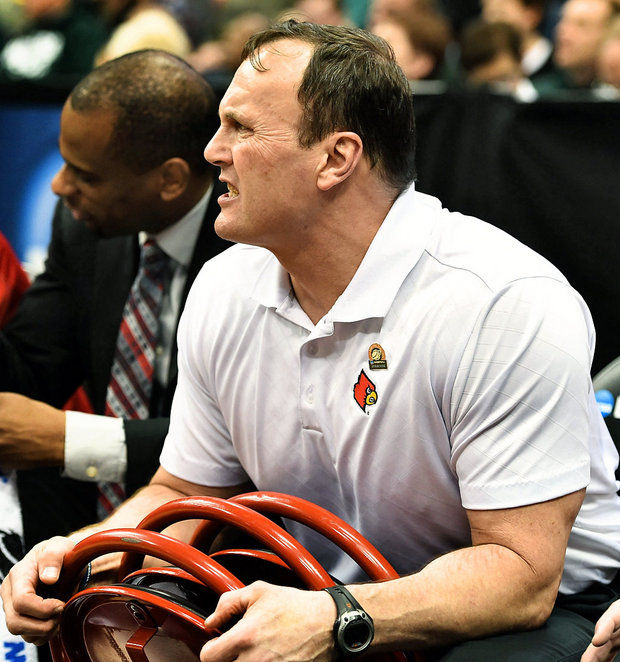 Last week hundreds of people flocked to the Atlantis resort and Casino to watch the Battle 4 Atlantis tournament.  Some people came with their favorite college basketball team while others came to see the triumphant return of Bahamian Michigan State player Lourawls “Tum Tum” Nairn Jr to his hometown.

While the games were ridiculously entertaining, especially Baylor’s thrilling come from behind victory over tournament favorite Louisville, and while most people were rightfully enthralled with all the on-court action, Louisville’s strength and conditioning coach Ray Ganong caught my attention, because, quite frankly, he was on the bench freaking the fuck out.

A quick google search of him during the game revealed to me that he just wasn’t amped for a big game against Baylor, this guy is a maniac and everyone around the Louisville program loves him for it.

Strength and conditioning coaches are usually easy to spot among the dozens of people clad in polo shirts and slacks around a college team’s bench, they’re usually the coach helping players get warmed up acting like they drank Red Bulls and did curls in the morning instead of eating breakfast. They’re pretty much all like that, and somehow Ray Ganong manages to be a little wilder and a little more frantic than the rest.

I’m not sure how Louisville will fare this season but I’ll definitely be rooting for coach Ganong.

Tom Herman should have to sit out a year

As many people predicted last week, University of Texas fired coach Charlie Strong replacing him with University of Houston Coach Tom Herman. I want to rag on Herman the way College Coaches rag on players for having the gall to want to go to a place where they will be the most fulfilled like, you know, normal ass students do.  I especially wanted to give Herman a hard time after all that hullabaloo he made about wanting to stay in Houston and building an elite program, because it’s kind of dumb that we don’t hold grown ass millionaires to the same standards as unpaid teenagers. But rather than complain I have a solution to the conundrum of the nomadic coach: Make them redshirt.

If Tom Herman wants to leave Houston and go to University of Texas he should have to sit out a year and be around the team , just like how the make the players do. There’s no reason colleges should be against it, they would rather college coaches to stay just like how the coaches want athletes to stay in situations that aren’t adventitious for them.  So make these assholes sit out a year.

As the NBA season carries on, Bahamian NBA player Buddy Hield’s minutes continue to free fall. He’s now averaging 11 minutes a game in the last 5 games after getting 25 minutes per in the first few weeks of the season, and this makes no goddamn sense.

Buddy is losing minutes to players like E’Twaun Moore and Tim Fraser, and despite the claims that can be made that they seem to be performing better on the court than Buddy (a super easy claim to make considering they actually get minutes), the fact of the matter is that outside of a brief winning streak that occurred when starting point guard Jrue Holiday returned from taking care of his sick wife, The Pelicans are a shitass team. Their “good” play has done nothing to affect the outcomes of games rendering it pretty much useless.

Shitass teams need to play their young players in order to make them better or boost their value so that they can trade them. So play Buddy or trade him! Goddamn!

The Weeknd’s Album is good as hell

I usually leave the music talk to Timmy but I can’t let this slide. I had last week off and I spend the bulk of it driving around listening to the Weeknd’s third album Starboy. Remember when Kanye’s album came out and for about a week all the cool people on the internets were buzzing about how it was some fucking masterpiece but it really sounded like the shrill noise inside a crazy person’s head (before we came to learn that it actually was the shrill noise inside a crazy person’s head).

Well the Weeknd’s album was actually as good as the hypebeasts say Ye’s album was Give it a listen.

For the last few weeks I’ve been talking about interim LSU football head coach Ed Orgeron, based on the fact that he talks like a Cajun maniac, and this weekend I (and by extension you) got some great news when it came out that LSU decided to hire Coach O on full time. That means more soundbites, and Coach O soundbites make me happy.