As you would expect from a country that managed to snag at least one track and field medal in  every Olympic Games since 1992 despite only having 300,000 people residing within its borders, The Bahamas is a country chock full of freakish run and jump athletes.  Basketball in The Bahamas very much reflects that.  Despite the athleticism Bahamian basketball players possess, they generally* suffer from a lack of fundamentals like shooting, ball handling and footwork as well as a lack of basketball IQ. This is due mainly to a lack of a comprehensive youth basketball infrastructure and experienced coaches.  Young Bahamian basketball players make up for their lack of fundamentals with a generally** attacking disposition on offense and a scrappy (if not wild) demeanor on defense.

There are certain players in the NBA who, from strictly from stylistic standpoints (both on and off-court) would look right at home on a playground in Nassau.  So here they are: my all-Bahamian NBA Team. 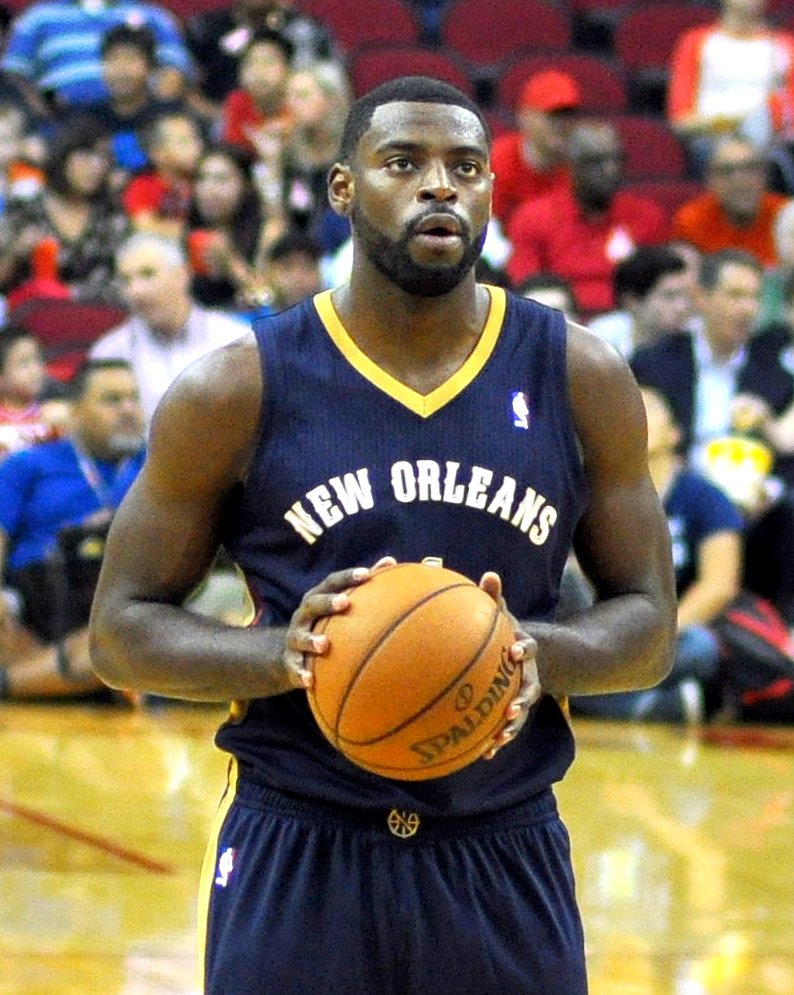 I remember watching Evans during his only season at the university of Memphis and being reminded of every ubertalented guard from Nassau who was empowered by their coach to do whatever the hell they want on the court, then took it way too far.  Evans is a ball dominant guard who likes to have the ball in his hands but can’t (or doesn’t) really get anybody else involved, and can’t run an offense.  Despite possessing more than adaquate shooting guard/small forward size standing 6’6″ with a 6’10” wingspan, Evans lacks the ability to play off the ball. Evans also can’t shoot the three and has no midrange pull-up game.  His shooting woes are obvious given his ugly shot mechanics and footwork. He really only does one thing well, that’s drive right.  Unfortunately for NBA defenses nobody can stop him doing this.  He’s the quintessential Bahamian point guard…..even if he isn’t do any point guard things other than dribble the ball…. a lot.

Or as my cohort Renaldo Dorsett calls him “C.C. Sweeting’s very own Tony Allen”.  Allen  is the living epitome of what it means to be a basketball player from the Bahamas.  Allen is like a Tasmanian devil out there changing entire games with his desire and grit on defense despite standing only 6’4″ (as every pipsqueak has ever told me on every park growing up: “I might be small but I got heart.”) .  Allen is a freak athlete who can run and jump with anybody in the league, but for some reason, despite bearing the positional title of  shooting guard the since his time in High School in Chicago, in Junior College, at Oklahoma State and in the NBA with the Boston Celtics and the Memphis Grizzlies, Allen can’t shoot a lick from outside of 5 feet.

Aside from having a nonexistent jumper, Allen has minimal ball skills and zero ability to create his own shot. Allen gets all of his points benefiting on cuts from the crafty passing ability of teammates Mike Conley, Marc Gasol and Zach Randolph, running fast breaks and on putbacks from scrappy hustle plays. He even looks like someone who’d show up at Delaport in a pair of jhorts on a crowded Sunday afternoon and try to start a fight over who has next. He damn sure plays like it.

Not only does Jimmy Butler have the official haircut of the average Bahamian high-school basketball player, he also has the game to match.  I can just picture Jimmy Butler now lounging around during a tournament at Kendall Isaacs gym in Nike Elite socks and thong slippers (cause people do that here for some reason).  Jimmy Butler is an athletic specimen and a disruptive defensive presence with so much potential that the Bulls felt comfortable ceding a starting wing spot to him in the wake of the Luol Deng trade last season.

According to basketball reference Butler shot a hair under 40% from the floor while shooting a Josh Smith-like 28.3% from three. Ouch. Combine these woeful shooting numbers with a lack of ability to do anything with the ball on offense but attack going right.  He’s plays like every other kid I’ve seen growing up in my hometown, but a million times better.

Aside from having the best beard in the NBA (non-James Harden Division), Reggie Evans is (stop me if I said this about anybody in this article before) an athletic specimen with the motor of a Tesla plugged into the energizer bunny’s battery. A sublime rebounder and defender, Evans carved out a twelve year career (and counting) in the NBA off the strength of his tenacity and energy.

What Reggie didn’t build his career off was offense. Reggie Evans can’t shoot if it isn’t a dunk or finish at the rim, he doesn’t post up and he’s a career 52% free throw shooter, the exact same number as the great Shaquille O’Neal.

Reggie Evans is the guy at the park that you’d hate to play against but will always want on your team (unless he finds himself with the ball in his hand 20 feet from the rim.) He’s also like the old guys in the Priory at St. Francis who will clothesline you and then start a half hour long argument that it’s not a foul because you didn’t call it. Scratch that I don’t want that guy on my team.

Andrew Drummond is a 7 foot tall 280 pound post-human with a  7’6″ wingspan who was rumored to be the fastest player on a college team that had Shabazz Napier and Ryan Boatright on it.  The fact that he can probably run track is probably the most Bahamian thing of all time.  Though he’s learning to defend and  his post up game is “two years away from being two years away” Drummond is an elite rebounder right now and will probably the best center in the league for the next ten years.

Today though, Drummond is on my all-Bahamian team. Though he is showing signs of developing a post game he’s not scoring the ball outside of 5 feet and shot an appalling 41.8% from the free throw line.  Like every kid in my hometown, Drummond has been playing off raw talent and minimal polish for awhile now. At only 21  entering his third year in the NBA, he has the chance to be so much more.

* these are sweeping generalizations, not everybody plays like this.